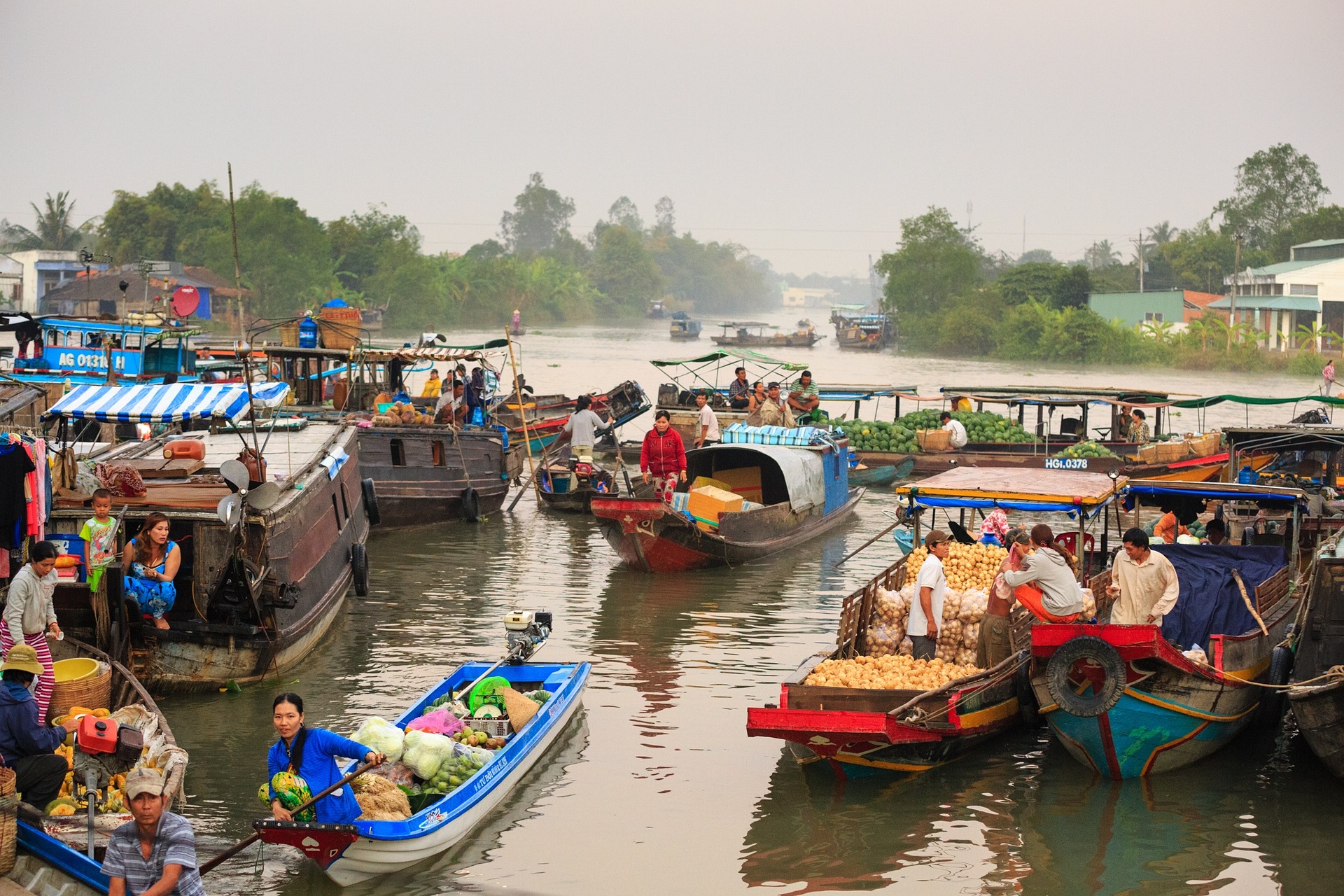 Upon arrival, make your way to Immigration for passport control. Once cleared, proceed to the Baggage Claim area to collect your luggage, and go through customs. When you exit the Arrival Hall, an Asia Outlook Travel Representative will be waiting to greet you at the Arrival Terminal - Gate A1. Transfer by air-conditioned vehicle to the hotel. Standard hotel check in time is 2PM. Spend the night in Hanoi.
2

Halong Bay was formed by dragons who used their tails to gouge out valleys and crevasses, and spat out jewels that turned into islands. Or so the Vietnamese believe. Whether true or not, this is an otherworldly landscape. On a traditional wooden junk, we'll drift through a fairyland of sheer limestone islands that rise from the emerald water. We'll pass by unique rock formations and discover caves in the rocks. Lunch is included in the junk and return to Hanoi in the evening.
3

There's no arguing - Hanoi has to be the coolest city in Vietnam. And no, we're not just referring to the climate. This chaotic, colorful, motorbike-clogged, 1,000-year-old city is a delicious mix of East and West. Hanoi clings on tightly to its heritage which can be seen in the Old Quarter and the many historic buildings and monuments. There's centuries-old pagodas, picturesque lakes and parks, as well as museums and prominent colonial buildings. Full day city tour includes the following: Visit the Museum of Ethnology (Note: Closed on every Monday) The Museum of Ethnology brings to life the astonishing ethnic diversity in Vietnam, with art and artefacts from the 54 different ethnic groups that inhabit the country. Inside the museum are detailed descriptions of minority groups, with examples of their traditional clothing and way of life. Outside are faithful reconstructions of traditional longhouses, cemeteries and other distinctive ethnic buildings. Visit the Temple of Literature The Temple of Literature has a peaceful series of walled courtyards and graceful gateways, and this monument is one of the best-preserved examples of traditional Vietnamese architecture. Founded in 1070 and dedicated to Confucius, this was also the site of Vietnam's first university. In one courtyard, giant stone tortoises bear stele on their backs, listing the accomplishments of graduating scholars. Visit Hoan Kiem Lake, Ngoc Son Temple and the Rising Sun Bridge Hoan Kiem Lake (Hoan Kiem means Lake of the Returned Sword), is a lake in the historical center of the Hanoi capital. It is one of the major scenic spots in the city and serves as a focal point for its public life. Legend has it that King Le Loi handed a magic sword called Heaven's Will which brought him victory in his revolt against the Chinese Ming dynasty back to the Golden Turtle God in the lake. The Tortoise Tower (Thap Rua) standing on a small island near the center of the lake is linked to the legend. The Ngoc Son Temple was erected in the 18th century. It honors the 13th -century military leader Tran Hung Dao who distinguished himself in the fight against the Yuan - Mongol invaders, Van Xuong, a scholar and Nguyen Van Sieu, a Confucian master and famous writer in charge of repairs made to the temple in 1864. Jade Island is connected to the shore by the wooden red-painted Huc Bridge (The Huc, means Morning Sunlight Bridge). Best seen on foot, Hanoi's Old Quarter is a fascinating maze of narrow streets that date back to the 13th century. Each street was named after the items sold there, so we'll come across streets selling clothes, silver goods, religious items, silk, china bowls - even coffins! Amongst these crowded, twisty streets we'll stumble upon art galleries, streetside cafes, steaming food stalls and incense-filled temples.
4

Continue your city tour before flying to Central Vietnam. Visit the Ho Chi Minh Memorial Complex (Ho Chi Minh Mausoleum be viewed from the outside only) Start the exploration of the vast Ho Chi Minh Memorial Complex with a stroll past the Ho Chi Minh Mausoleum which contains the embalmed body of Ho Chi Minh (Note: Closed on every Monday, Friday, and from 15 June to 15 August). View the outside of the Presidential Palace and then walk through the park to the Ho Chi Minh Stilt House where Ho Chi Minh lived from 1958 until his final days in 1969. Preserved in the same condition as during his life, it may be viewed through the windows. Continue to the miniature 11th century One Pillar Pagoda which was rebuilt after being destroyed by the French in 1954. Hold on to your seats as we whizz around West Lake in an electric cart! This is a great way to see the sights around Hanoi's largest lake. We'll stop to take photos of ancient temples and the views across the water. Transfer by air-conditioned vehicle to airport for the flight to Danang (flight time TBA). Upon arrival, transfer to hotel in Hoi An and check in. Rest of the evening is free for leisure.
5

Morning at leisure. Sightseeing in Hoi An half day. The quirky mix of Chinese, Japanese, Vietnamese and European influences makes Hoi An a photographers' paradise. We'll walk through the narrow winding streets of the old quarter past ochre-hued stone houses, lantern-filled shops and colorful fishing boats. One of the most iconic sights is the Japanese Covered Bridge. There are also ancient temples and merchant homes over 200 years old. We'll explore many of the historical sites within the town. Today's Highlights: Hoi An ancient town. Sunset dinner cruise aboard the Cinnamon on Thu Bon River (SIC, 2 hours)
6

By vehicle from Hoi An to Hue (140 kms). Drive from Hoi An to Hue along scenic mountain roads with spectacular views over the coastline. Highlights along the way include the dramatic Hai Van Pass, the high dividing line between the climate zones of North and South Vietnam; Lang Co, a lovely stretch of beach curving outwards between a clear blue lagoon and the East Vietnam Sea; and the large coastal city of Danang. Let's go back in time and bask in the beauty of the Nguyen dynasty. The 19th century Imperial Citadel is a city within a city. The striking Flag Tower and imposing Ngo Mon Gate lead into spacious courtyards, palaces, pavilions, reception halls and lotus ponds - providing a fascinating glimpse into court life. Today's Highlights: Sightseeing in Hue including Visit the Imperial Citadel Located in the heart of Hue is the Imperial Citadel, a vast complex built in the early 19th century and modelled after the Forbidden City of Peking. The original walls stretched for 10 km and were surrounded by a wide moat. Today, most of the buildings have been destroyed due to bombing during the Vietnam-American War, but the monuments that remain provide a fascinating glimpse into the court life of the Nguyen Dynasty. Approach the city past the striking Flag Tower, where a giant Vietnamese flag waves proudly overhead, to the imposing Ngo Mon Gate, the main entrance to the Imperial Enclosure. Enter into an area of spacious courtyards and serene lotus ponds, and visit Dien Tho Residence (Dien Tho palace) where the Queen mother lived, visit Thai Hoa Palace, the magnificently decorated reception hall, the Halls of the Mandarins, and the original Nine Dynastic Urns, among other sites, including a visit to the Hue Royal Antiquities Museum. Visit Dong Ba Market Dong Ba Market is a local market near the Imperial City Rumored to be haunted, a flashpoint for anti-government protests, and the site of a famous self-immolation by a monk. Thien Mu Pagoda will lure us in with its beauty, elegant architecture and evocative past. We'll travel by boat along the Perfume River to visit the iconic pagoda. Check in at the hotel in Hue for overnight.
7

Breakfast at the hotel then leisure time. Transfer to airport for flight to Ho Chi Minh City (flight time TBA). Upon arrival, transfer to the hotel and check in. Rest of the day is free for leisure.
8

Ever-vibrant, ever-changing - this is the buzzing city of Ho Chi Minh City, where sleek skyscrapers loom over incense-infused temples and motorcycles rules the roads. There are classic European-style landmarks such as the Notre Dame Cathedral, the Opera House, the ornate City Hall and the art-deco Post Office. Reminders of a recent past can be seen in the Reunification Palace, famously stormed by tanks in 1975. We'll head out to Cholon, the historic Chinatown district to discover colonial-era gems, Chinese temples and vivacious street life. Make sure you save some energy for browsing the stalls in the bustling Ben Thanh Market. Today's Highlights: War Remnants, Rue Catinat. Reunification Palace, Emperor of Jade Pagoda, Notre Dame Cathedral, Central Post Office, Ben Thanh Market, Cholon.
9

Breakfast at the hotel then check out (hotel check out time is 11AM). Transfer to the airport for your homeward flight.

You don't have permission to register